Dan Servodidio brings you the top plays to build your lineups around for today's early slate on DraftKings and FanDuel! 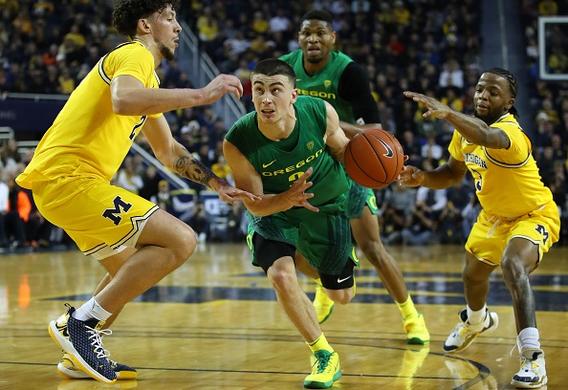 (by Implied Points & Spreads per KenPom)

If you’ve played DFS CBB at all this season, you know about the massive ceiling and floor that Iowa’s Luka Garza provides. His DK salary may seem expensive, but Garza has been usually well worth the pay-up because of his dominant play despite tough matchups in the Big Ten. The big man is averaging 26 real points and 45 DK points over the last ten games and he’s coming off a three-game stretch to end the regular season where he averaged 26.3 real points, 12.3 rebounds, 3.3 blocks and over 53 DK points. Garza has been dominant with Iowa trying to improve their NCAA Tournament resume and that shouldn’t stop today - even in a matchup with Minnesota center Daniel Oturu. In two games against Minnesota this season, Garza averaged 41 DK points, 22.5 real points and nine boards per outing.

If you’re playing on DK today, Payton Pritchard deserves strong consideration as one of the best expensive options on the slate - even at his 9k price tag. The Ducks’ senior point guard consistently has a high DFS floor and ceiling with his large involvement in all phases of the offense - and that won’t change in a favorable matchup vs. rivals Oregon State. Over the last ten games, Pritchard is averaging 22.1 real points and 38 DK points and he’s currently on a four-game streak of scoring 20+ points. He’s had to do a little more than usual offensively with Chris Duarte out and that’ll be the case again today with Duarte slated to sit out the Pac-12 tourney. In two games against Oregon State this year, Pritchard has put up 38 and 37 DK points while averaging 19.5 real points, six assists and two steals across both outings.

The ACC Player of the Year is always one of the best guards on the DFS slates, and he’ll certainly be in a good spot today in a fast-paced matchup with NC State. As Duke’s starting point guard and best all-around player, Tre Jones has a very high floor and equally high ceiling with his large offensive usage and shot volume - not to mention his production in every other stat category. In two matchups vs. NC State earlier this season, Jones put up 32 and 38 DK points while averaging 16 points scored, six rebounds, four assists and three steals across both outings. This is basically par for the course for Jones as he’s averaging 36 DK points over the last ten games as a usual stat-stuffer. He’s a solid pay-up option on DK but he’s even more valuable on FD on the smaller slate.

Creighton will be without starting point guard Marcus Zegarowski for the Big East tournament as he recovers from a knee injury he suffered in the season finale. This is a huge loss for the Bluejays’ offense and the team will have to rely more heavily on its other stud guard, Ty-Shon Alexander, until Zegarowski returns. Alexander has been the starting shooting guard but he has the ability to handle the ball at the point - and he’ll definitely see an uptick in shot volume and offensive usage with his teammate out. The junior had a 24% shots share and 21% usage rate during conference play and he should see a large amount of Zegarowski’s role in the Creighton attack. The team’s other star guard, Mitch Ballock ($6,800 DK / $6,100 FD), should also get a big bump in DFS value. This matchup vs. St. John’s should be one of the highest-scoring and fastest-paced games on this early slate.

With Oregon starting guard Chris Duarte slated to miss the entire Pac-12 tournament, Anthony Mathis will continue to see extended minutes with a larger offensive role. Mathis began the year as a regular starter but had been coming off the bench for most of conference play. As Duarte missed the last three games, though, Mathis has moved back into the starting lineup and his DFS value is now a lot higher with the increase in playing time and shot volume. In his three starts, the senior is averaging 22.3 DK points and 14.7 real points per game while shooting an efficient 63% from three-point range (12-for-19). One of those outings came against today’s opponent, Oregon State, when Mathis put up 21 DK points with 13 points scored. We should expect him to play a lot as a starter again - and his increase in shot volume and role will make him a value on DK’s slate.

One of the feel-good stories in college basketball over the past couple weeks has been the emergence of Justin Robinson as a legit role player for the Blue Devils. The son of basketball legend David Robinson barely played for most of the season as he battled injuries and was pretty far down on Duke’s depth chart. However, the senior logged 14 or more minutes in three of the last four games as he brought a different type of energy and athleticism to the rotation. Robinson put up 20 or more DK points in all three of those games where he saw an increase in playing time. One of those performances came against today’s opponent, NC State, a week ago when Robinson had 22 DK points with his 10 points scored and six rebounds. It seems likely that Robinson will continue to see extended minutes as a key backup to Vernon Carey in the frontcourt as Coach K will want him to get game experience before the upcoming NCAA Tournament.

With Creighton’s starting point guard Marcus Zegarowski ruled out for the Big East tournament, Shereef Mitchell becomes an instant value as he should see a big increase in playing time. Mitchell hasn’t seen a ton of minutes off the bench lately, but there’s a decent chance he enters the starting rotation now with Zegarowski out. The freshman actually started the first two games of this season before Damien Jefferson eventually took over the starting role. During conference play, Mitchell has the team’s second-highest assist rate (behind Zegarowski) and he’s been playing as the main backup point guard - albeit in limited fashion. His salaries are so cheap on both sites that he doesn’t have to do much to return value - and Mitchell should be a near-lock in all formats because of his big increase in role and minutes.

The Gators’ starting big man Kerry Blackshear is questionable to play today and if he’s unable to go, Omar Payne would be an instant value on DK. Blackshear suffered a wrist injury in Florida’s last game and he’ll likely be held out for at least one game and maybe more to ensure he’s healthy for the upcoming NCAA Tournament. In Blackshear’s possible absence, we should see Payne enter the starting rotation and play a ton of minutes in the frontcourt alongside power forward Keyontae Johnson. Payne, a 6-foot-10 freshman, had started seven games earlier this season before moving back to a bench role for most of conference play. On Saturday vs. Kentucky, Payne logged 20 minutes after Blackshear got hurt - his most playing time since late January - and he put up 15 DK points with six points scored, three rebounds and three blocks. Florida has a couple other big men who could see increased minutes, but Payne has the more proven track record this season as one of the team’s better rebounders and shot-blockers.