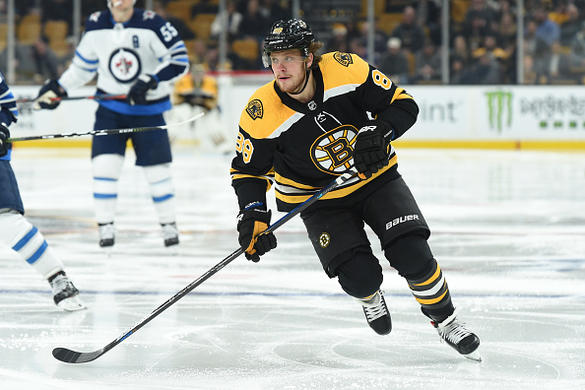 It’s not everyday that a player gets hurt leaving a private event, but that’s what happened to Pastrnak. The Boston forward fell and injured his thumb on Sunday and is expected to miss a minimum of two weeks. The surgery did go well, so now it’s a question of waiting for the thumb to heal. Freak accidents don’t happen very often, but this one is a tough blow for fantasy owners. Pastrnak is having another great season and hopefully he won’t miss more than two weeks.

Speaking of freak accidents, goalie Craig Anderson suffered an eye injury after taking a tennis ball in the gym and is questionable for Thursday’s game against Detroit. It doesn’t appear to be a serious injury, so it’s likely that Anderson will at least be able to backup Thursday night. We should get an update on his status either Wednesday at practice or Thursday after morning skate.

Tough loss for the Pittsburgh Penguins as it was announced Monday that Olli Maatta will be out indefinitely after suffering an upper-body injury. The 24-year-old isn’t a huge loss for fantasy owners because he’s probably not part of many teams. The defenceman has only 13 points in 55 games, so if he is on your team, go ahead and drop him.

Lightning forward Ondrej Palat was a late scratch on Sunday night and he was once again held out of the lineup Tuesday. The team has confirmed that Palat has an upper-body injury, but there is no word on when he may be ready to return. It doesn’t seem to be anything serious, so he’s more day-to-day. Tampa Bay is in action Thursday against Dallas, so the 27-year-old could be ready to return then. Palat has missed some time due to injury this season, but he has collected 21 points in 39 games and is seeing some time on the top line with captain Steven Stamkos. We should get an update on his status before Thursday.

Injury: knee, out for season.

Really tough to see Minnesota captain Mikko Koivu miss the rest of the season due to an ACL tear in his right knee. The veteran forward finished the season with 29 points in 48 games. The 35-year-old is expected to make a full recovery and be ready for next season. He still a great two-way center in the league, but his offensive abilities are starting to decline. He was borderline fantasy relevant this season and he will most likely go undrafted in many redraft leagues next season.

Tough blow for rookie goalie Thatcher Demko, as it looks like he will continue to be out of the lineup with a sprained right knee. The 23-year-old has already been out of the lineup for the last week and there hasn’t been an update on his status. He’s expected to be back before the end of February, so fantasy owners can hold onto him if they absolutely need a goalie. Demko is the future in goal for his team, but there’s no guarantee that he gets many starts down the stretch.

There is still no timeline for the return of Ben Bishop. The veteran goalie was placed on injury reserve last week with an upper-body injury and that’s all we know. He’s already missed three games since hitting IR, but there is some hope that he can return this week. Bishop was on the ice this morning for an optional skate, but head coach Jim Montgomery didn’t give an update as to when we can expect the starting goalie to return. For fantasy owners, it’s a “wait and see” approach. Bishop will regain his starting job when he comes back, but the question is--when? Let’s hope he can return at some point this week. 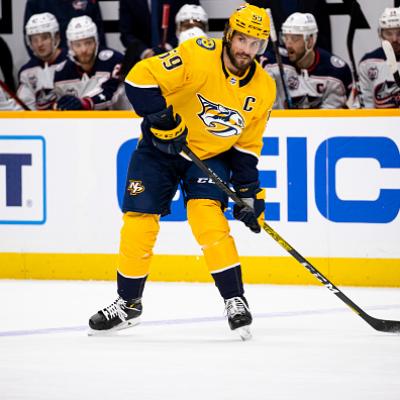 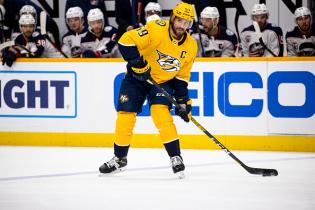 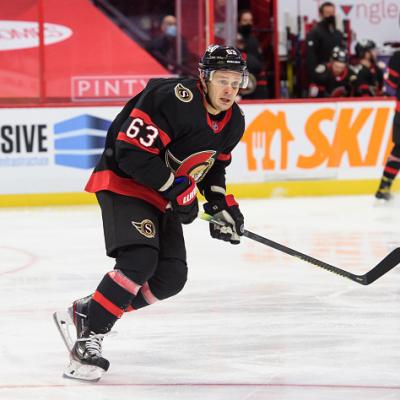 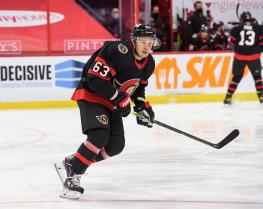 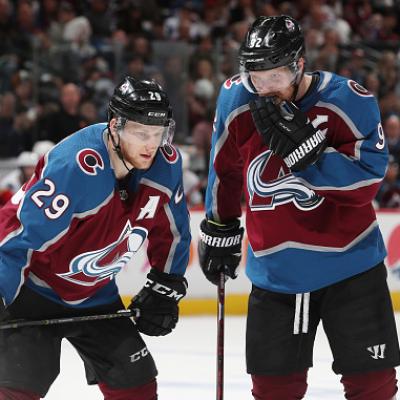 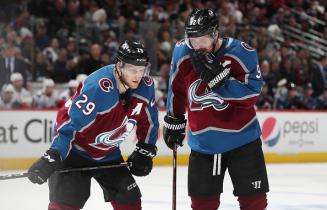 NHL Thatcher Demko gets the start on Wednesday night

NHL Panthers will go with Chris Driedger on Thursday

M. Hogberg - G
OTT
Marcus Hogberg allowed five goals on 35 shots in Wednesday's 5-1 loss to the Vancouver Canucks.
This game was actually tied, 1-1, after the first period, but the Senators eventually allowed the Canucks' stars to take over the game (J.T. Miller had three points in the second period, Elias Pettersson had two points and Quinn Hughes had two points). Hogberg has dropped each of his first two decisions of the 2021 season. The 26-year-old has also given up five goals in each of his two decisions. Hogberg owns a 4.33 goals-against-average and a .867 save percentage. He'll continue to serve as Matt Murray's backup in Ottawa this season.
Added Yesterday 11:00 pm (EST)
Added Yesterday 11:00 pm (EST)

T. Demko - G
VAN
Thatcher Demko turned aside 42 of 43 shots in Wednesday's 5-1 win over the Ottawa Senators.
The Canucks goaltender has struggled at times this season, but he looked sharp tonight. Demko managed to turn aside all 29 shots he faced at even-strength, but he allowed a power-play goal to Josh Norris in the first period. The 25-year-old has now beaten the Senators in back-to-back games. He has a 2-3-0 record with a 3.67 goals-against-average and a .909 save percentage this season. Demko and Braden Holtby will likely continue splitting the starts pretty evenly as this season goes on.
Added Yesterday 10:56 pm (EST)
Added Yesterday 10:56 pm (EST)

J. Norris - F
OTT
Josh Norris found the back of the net in Wednesday's 5-1 loss to the Vancouver Canucks.
Norris tied the game, 1-1, on the power play when he finally buried a puck that had been bouncing around the Canucks crease for a few seconds. Unfortunately for the rebuilding Sens, they couldn't muster up any more offense tonight. Norris finished the game with two penalty minutes, seven shots on goal and a blocked shot in 16:59 of ice time. The 21-year-old is now up to two goals and five points in seven games this season. Norris is off to a decent start this year, but he isn't worth picking up in most 10 or 12-team fantasy leagues yet.
Added Yesterday 10:52 pm (EST)
Added Yesterday 10:52 pm (EST)

J. Miller - F
VAN
J.T. Miller picked up two goals and an assist in Wednesday's 5-1 win over the Ottawa Senators.
Miller did all of his damage in the second period of this game. His first goal, which was scored at the 1:16 mark of the frame, gave the Canucks a 2-1 lead and it proved to be the game-winner. He second tally, which came 6:13 later, made it 3-1 for Vancouver. Miller also added the primary assist on Elias Pettersson's power-play goal that came with less than three minutes remaining in the period. He finished the game with a plus-2 rating, four penalty minutes, four shots on goal and four hits in 19:00 of ice time. The two goals he scored tonight were his first two of the 2021 season. He's up to eight points in six contests.
Added Yesterday 10:46 pm (EST)
Added Yesterday 10:46 pm (EST)

K. Lankinen - G
CHI
Kevin Lankinen allowed one goal on 42 shots during Wednesday's 2-1 shootout loss to the Nashville Predators.
This was an unfortunate result for Lankinen, as he was really good throughout this game. All he allowed was a goal to Nick Cousins in the third frame and a shootout goal to Matt Duchene. The 25-year-old has made four appearances for the Blackhawks this season and he's given up two goals or fewer in three of those outings. Lankinen has a 2-0-2 record with a 2.18 goals-against-average and a .931 save percentage in 2021. Chicago came into the season with the worst goaltending situation in the NHL, but it looks like they may have a solid netminder in Lankinen.
Added Yesterday 10:43 pm (EST)
Added Yesterday 10:43 pm (EST)

J. Saros - G
NSH
Juuse Saros allowed one goal on 30 shots in Wednesday's 2-1 shootout win over the Chicago Blackhawks.
Saros played really well on Wednesday, as he made several big saves in regulation and in the overtime period. The 25-year-old also turned aside all three Blackhawks shooters (Dominik Kubalik, Patrick Kane and Mattias Janmark) in the shootout, while Matt Duchene scored the game-winner for Nashville. Saros hadn't won a game since Jan. 16. He owns a 3-2-0 record with a 2.54 goals-against-average and a .918 save percentage this season. It looks like he's going to get to play more than veteran Pekka Rinne this season. That's something fantasy GMs should keep in mind.
Added Yesterday 10:39 pm (EST)
Added Yesterday 10:39 pm (EST)

R. Carpenter - F
CHI
Ryan Carpenter scored a goal in Wednesday's 2-1 shootout loss to the Nashville Predators.
Nick Cousins opened the scoring for Nashville at the 5:24 mark of the third period, but Carpenter responded exactly four minutes later to tie the game. The Blackhawks forward finished the night four shots on goal and a plus-1 rating in 15:11 of ice time. This was the 30-year-old's first point of the season, so you know that he shouldn't grab your attention in any fantasy format. Dominik Kubalik, Patrick Kane and Mattias Janmark failed to score in the shootout.
Added Yesterday 10:34 pm (EST)
Added Yesterday 10:34 pm (EST)