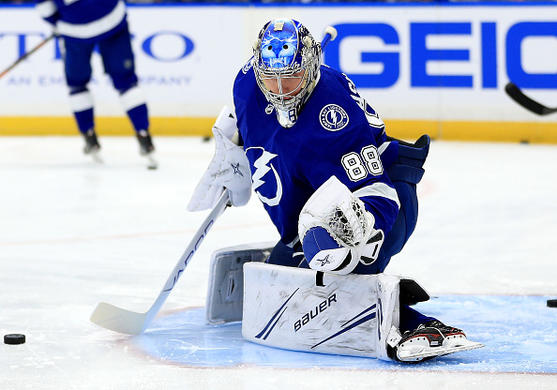 What a massive blow for the Tampa Bay Lightning. Vasilevskiy is confirmed to be out four-to-six weeks, but there’s a good chance that he’s out closer to the latter part. It’s hard to lose a number one goalie, especially an elite one. Tampa Bay will now rely on Louis Domingue to help keep the ship afloat for the next couple of weeks. As for fantasy owners, they will need to ride this one out. You can’t replace a player like Vasilevskiy, so you can only hope to stay alive (or make a decent trade) till he comes...

T. Rask - G
BOS
Tuukka Rask and Jaroslav Halak have been named co-winners of the William M. Jennings Trophy.
The goalie tandem in Boston registered a league-low 174 team goals-against during the shortened 2019-2020 NHL regular season, which officially came to a close this week. Rask should be the primary netminder for Boston in the planned 24-team return-to-play playoff tournament.
Added 12:26 pm (EST)
Added 12:26 pm (EST)

L. Draisaitl - RW
EDM
Leon Draisaitl has been awarded the Art Ross Trophy.
The trophy goes to the player who leads the league in points at the end of the regular season, and the NHL officially announced on Tuesday that the 2019-2020 regular season had concluded amid the coronavirus pandemic. Draisaitl tallied a whopping 43 goals and 67 assists (110 points) in 71 games this year for the Oilers. Connor McDavid finished second on the NHL's points leaderboard with 97.
Added 12:19 pm (EST)
Added 12:19 pm (EST)

A. Ovechkin - F
WSH
Alex Ovechkin and David Pastrnak have been named co-winners of the Rocket Richard Trophy.
Ovechkin and Pastrnak finished tied for the NHL lead in goals with 48, though Pastrnak did appear in two more games than Ovechkin. Ovi's Capitals and Pastrnak's Bruins will both be participants in the NHL's planned 24-team return-to-play playoff tournament, which will hopefully get underway sometime in July.
Added 12:14 pm (EST)
Added 12:14 pm (EST)

N. Bjugstad - F
PIT
Nick Bjugstad underwent surgery Tuesday to repair a lower-body injury.
Bjugstad was labeled as week-to-week back in early March, just before the NHL season got put on pause amid the coronavirus pandemic, and he apparently suffered a setback during the shutdown. The 27-year-old forward will not be able to participate in the league's planned 24-team return-to-play tournament. It's unclear at this point whether his rehab will stretch into the 2020-2021 campaign.
Added Yesterday 11:12 am (EST)
Added Yesterday 11:12 am (EST)