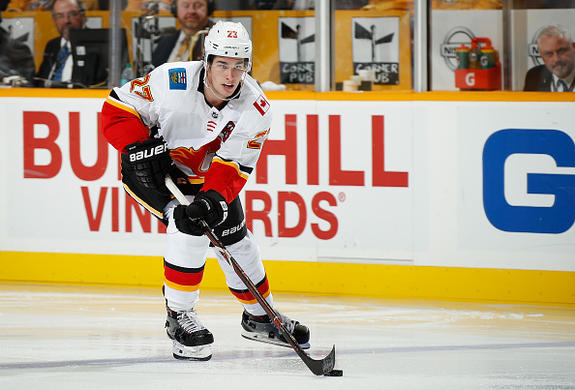 Below is a breakdown for Sunday’s four-game NHL DFS main slate followed by example lineups.

The Flames are easily the biggest favorite of the day at -220 against the Red Wings who allow the most goals per game. You’ll certainly want Flames in your cash lineups as they’re obvious chalk. Sean Monahan centers Johnny Gaudreau and Elias Lindholm in the top line, and the trio plays on the top PP unit. The entire line is pricey on both sites, but Monahan and Lindholm are more affordable than Gaudreau who is borderline too expensive. Matthew Tkachuk is the fourth forward on the top PP unit, and he is priced well on FD where he will take up 2.7-percent less of the cap than he will on DK. Defenseman Rasmus Andersson plays on the top PP unit and can paired with top power play forwards.

Vegas is the second biggest favorite of the slate in Anaheim as -170 favorites against the Ducks. The Golden Knights are playing for the second day in a row, but they must be considered...

K. Curran - D
ANA
Ducks signed D Kodie Curran to a two-year, $2 million contract.
Curran went undrafted after five seasons at the University of Calgary, but he eventually made a name for himself in the European leagues and could potentially carve out a substantial role with Anaheim in 2020-2021. The 30-year-old defenseman was named the best player in Sweden’s top league this past season after recording 12 goals and 37 assists in 48 games for Rogle BK Angelholm.
Added Jun 01 8:45 pm (EST)
Added Jun 01 8:45 pm (EST)