Fantasy Baseball Daily Round Up: August 12 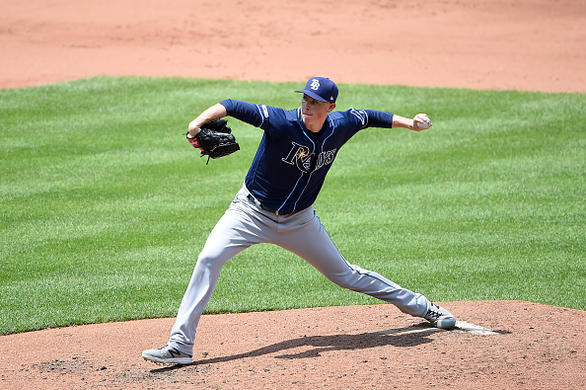 After taking three out of four from Minnesota, the Indians have pulled even in the AL Central. Despite the identical records, Fangraphs has Minnesota with a 59.5-percent chance to win the division and Cleveland with only a 40.5-percent chance. The Twins have a run differential of 131 compared to only 82 for the Indians, which is the reason for the discrepancy in the odds to win the division. Cleveland hosts Boston and travels to New York this week while Minnesota travels to Milwaukee and Texas.

Mike Minor might deserve this slot for his eight scoreless innings in which he only allowed five baserunners and struck out 11. But Minor is virtually universally owned, so we’ll go with a more lightly owned choice. Ryan Yarbrough , who is owned in less than 30 percent of ESPN leagues, came one out short of a complete game while allowing no runs and only three baserunners with eight strikeouts. Yarbrough only threw 99 pitches and apparently wasn’t happy about not being allowed to finish the game, but it was only a 1-0 lead. Yarbrough bumped his strikeout rate up over 20-percent, but he’s not a big swing-and-miss guy. His skill is limiting traffic as he owns a 3.4-percent walk rate. He can really help with your WHIP as he has allowed less than a baserunner per inning on the year.

Only two hitters had double-digit total bases on Sunday, and they both play for the Royals who rank bottom five in runs scored per game. Jorge Soler and Hunter Dozier each homered twice with Soler adding a double and a walk and Dozier adding a triple. Soler now has 35 home runs on the season while Dozier has 22, though Dozier has been the better hitter overall with a 138 wRC+ to Soler’s 131. Dozier has three multi-homer games in August.

Jorge Soler and Hunter Dozier each have 4 HR at Comerica Park this season. That's more than every Tiger except JaCoby Jones and Brandon Dixon . This team is so bad.

One day after the Astros dropped 23 on the Orioles, Baltimore got some revenge with an 8-7 win. The game featured five lead changes including one in each half of the ninth inning. The Astros entered the ninth trailing 5-4 but quickly erased the deficit as the first two batters reached and scored on a Michael Brantley triple. Brantley also scored on the play after an error and gave Houston a two-run lead. The Orioles got to within a run on a Chris Davis sac fly in the bottom half and were down to their final out when Rio Ruiz hit a game-winning two-run home run off Roberto Osuna . Here’s the game graph courtesy of Fangraphs. 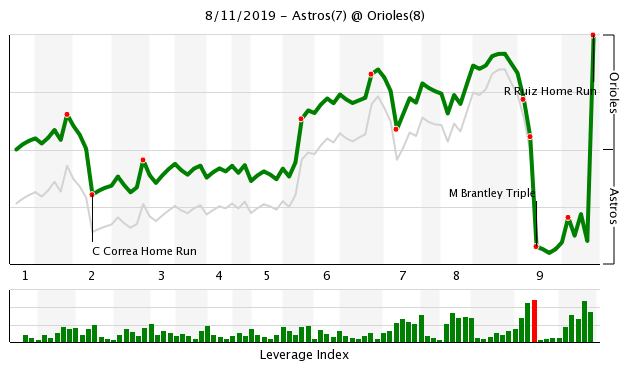 Monday isn’t the most exciting slate. The best match-up is Boston at Cleveland, though the Red Sox aren’t all that close to a playoff spot. The Yankees and Orioles will play a doubleheader, Zack Greinke will make his second start for Houston against the White Sox, and there is a Coors game with Arizona traveling to Colorado.

G. Gallegos - RP
STL
According to Ben Frederickson of the St. Louis Post-Dispatch, Giovanny Gallegos has tested positive for COVID-19.
Cardinals president John Mozeliak said Friday that Gallegos was still in his native Mexico, and he'll presumably have to continue quarantining there until he returns two straight negative COVID-19 test results in line with MLB's intake testing protocol. The 28-year-old seemed like a good candidate for saves this season in St. Louis with Jordan Hicks still working his way back from Tommy John surgery. Carlos Martinez and Alex Reyes, a couple of other options at closer, are also absent from summer camp workouts in St. Louis.
Added 6:53 pm (EST)
Added 6:53 pm (EST)

J. Lowrie - 3B
NYM
Jed Lowrie declined to reveal the exact nature of his leg injury during a Zoom call with reporters on Sunday.
Lowrie said he didn't want "create any distractions" by revealing the diagnosis. It's been clear for a while that he's been hobbled by more than just the knee issue that required a surgical repair last year. He's trying out different leg braces that will hopefully allow him to contribute in some capacity this season. Lowrie, 36, has appeared in just nine games for the Mets since being inked to a two-year, $20 million deal in January 2019.
Added 6:37 pm (EST)
Added 6:37 pm (EST)

M. Tanaka - SP
NYY
Masahiro Tanaka was diagnosed with a mild concussion, per Yankees manager Aaron Boone.
Tanaka took a Giancarlo Stanton line drive to the head on Saturday afternoon, but he returned to Yankee Stadium on Sunday and was reportedly in good spirits. Boone said he's hopeful the veteran right-hander will be ready for the start of the 2020 season, but concussions are usually unpredictable things. Tanaka will probably have to return to the mound by the end of next week to be properly stretched out come late July.
Added 6:28 pm (EST)
Added 6:28 pm (EST)

K. Jansen - RP
LA
Dodgers manager Dave Roberts announced Sunday that Kenley Jansen has not reported to summer camp.
Roberts declined to offer an explanation for Jansen's absence, which has become the typical playbook on players who have yet to fully pass through MLB's COVID-19 testing protocols. It could be that the results aren't in yet. Jansen is currently going as the No. 5 reliever off the board in the average Yahoo draft after registering a 3.71 ERA, 1.06 WHIP, and 80/16 K/BB ratio over 63 innings last year while earning 33 saves. Pedro Baez is probably the secondary ninth-inning option for the Dodgers leading into the planned 60-game campaign.
Added 6:18 pm (EST)
Added 6:18 pm (EST)

C. Rodón - SP
CWS
Carlos Rodon (elbow) threw a three-inning simulated game on Sunday.
Rodon had an uncertain timetable this spring after undergoing Tommy John surgery last May, but the COVID-19 shutdown has allowed him time to work to full strength. The 27-year-old left-hander is presumably in the running for a rotation spot at summer camp with the White Sox, though he could be worked back in as a long reliever. Many teams could carry more than five starters and a number of mop-up types.
Added 6:11 pm (EST)
Added 6:11 pm (EST)

S. Bieber - SP
CLE1
Indians pitching coach Carl Willis raved about Shane Bieber's first summer camp workout on Saturday.
“They (the hitters) can attest to it,” Willis said Sunday on a Zoom call with reporters. “He was really, really good yesterday. From a stuff standpoint, velocity-wise, pitch profiles and execution I don’t think anyone could have been more pleased with what we saw.” Bieber should be treated as top-10 starter in fantasy drafts this summer after registering a 3.28 ERA, 1.05 WHIP, and 259/40 K/BB ratio over 214 1/3 innings last year at age 24.
Added 5:02 pm (EST)
Added 5:02 pm (EST)

Y. Darvish - SP
CHI1
Yu Darvish threw his new pitch, a two-seam/splitter hybrid, during his first intrasquad game appearance on Saturday.
Darvish, who already had 10 different pitch variations in his arsenal, is calling this new pitch "The Supreme." The veteran right-hander posted a 2.95 ERA -- and a ridiculous 124/7 K/BB ratio -- over his final 88 1/3 innings (14 starts) last season and seems well-equipped to flourish during MLB's planned 60-game 2020 campaign. He is currently going as the 17th starter off the board in the average Yahoo draft, with an overall ADP of 60.1.
Added 4:54 pm (EST)
Added 4:54 pm (EST)

J. Luzardo - SP
OAK
Athletics manager Bob Melvin said Sunday that Jesus Luzardo's status is "pending."
Word is the A's are still waiting for COVID-19 test results on a number of players in their 60-man pool, and that could be the issue here. Mike Fiers has also been absent from the first round of summer camp workouts in Oakland, and he and Luzardo spent some of the shutdown together in Florida. Luzardo carries immense fantasy upside into MLB's planned 60-game campaign given that workload should no longer be an issue.
Added 4:41 pm (EST)
Added 4:41 pm (EST)