Brett Talley has updated some of the more notable training camp battles as we near the end of the preseason. 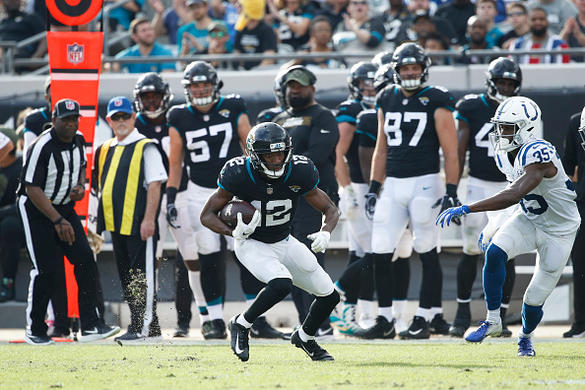 The first full week of the preseason began on Thursday night, and in the week leading up to it there were plenty of developments in some key training camp battles.

After suffering a season-ending knee injury last preseason, Marqise Lee started this training camp on the PUP list.  ESPN’s Michael DiRocco reports that beyond Dede Westbrook the receiver position is wide open for Jacksonville. Sophomore D.J. Chark and the benched-in-2018 Keelan Cole are in the mix along with newcomers Chris Conley and Terrelle Pryor . But this is brought up less to discuss which guy might grow into a reliable second option because that seems unlikely to happen, but more to point out that Dede is probably undervalued at WR39 according to our ADP report.

The Cards worked out Michael Crabtree this week, signaling they may not be happy with their wide receiver group. Larry Fitzgerald and Christian Kirk are set as the top two receiving options, and David Johnson is realistically one of the team’s top three receiving options as well. We just got done talking about how the second receiver in Jacksonville may not be all that relevant, so it may be silly to spend time discussing Arizona’s fourth pass catcher. But given the expectations for their new Kliff Kingsbury-led offense that’s expected to go up-tempo and feature many multi-receivers sets, that third receiver slot is intriguing. Per The Athletic, it’s rookie KeeSean Johnson who currently has that spot. Johnson may not be worth a draft pick outside of deep leagues yet, but he is a name to know.

It’s no secret that the San Francisco running back room is crowded with Tevin Coleman , Jerick McKinnon , Matt Breida , and even Raheem Mostert on the roster. More than likely, this ends up being a committee that frustrates fantasy owners all season. ESPN’s Nick Wagoner reports as much in his piece on the San Francisco backs. However, that article states “Coleman appears to be first in line.” With an ADP rank of RB30 currently, there aren’t a lot of backs going after Coleman that can be considered “first in line,” which means he’s likely a bit undervalued.

Sticking with the 49ers, Dante Pettis is the only San Fran wide receiver going in the top 100, and Marquise Goodwin is the only other of their receivers being drafted in most leagues. But this report from The Athletic says the first four receivers spots belong to Pettis, Deebo Samuel, Jalen Hurd and Trent Taylor . The report even entertains the idea that Goodwin might not end up with a roster spot. If you’re taking fliers on Goodwin in the late rounds of your drafts, stop it.

In my pre-camp look at the most important training camp battles to watch on each team, comments were referenced from Andy Reid and OC Eric Bieniemy about Damien Williams being prepared for a feature role. The Chiefs haven’t even played their first preseason game yet, and that’s out the window.

Andy Reid appeared on the @SiriusXMNFL Training Camp tour and said to expect an RBBC in the Chiefs backfield this season. Along with Damien Williams , he pointed out the play of Darrell Williams and also mentioned Carlos Hyde .

Williams is still RB14 according to our ADP report, but you have to expect his ADP to drop from the beginning of the third round. Given the real possibility of a committee in KC now, Williams belongs more in the group of backs going in the fourth or fifth round that includes San Francisco’s Coleman who is arguably in a similar situation.

Per ESPN’s Mike Triplett, “Alvin Kamara averaged 54 offensive snaps per game when Mark Ingram was gone from Weeks 1-4. But he averaged just 38.5 per game after that, including the playoffs.” According to Sean Payton, the Saints would like to keep Kamara’s workload relatively similar, with him playing about 60 percent of the team’s snaps. Newcomer Latavius Murray had almost identical carry/reception totals to Ingram last year, though in four more games. Murray may not fill Ingram’s role exactly, but he’s likely to get an only slightly reduced version of it. Ingram finished RB28 in standard scoring last year and Murray is currently going RB35, which means he’s worth a pick in the late-seventh or early-eighth round where he’s being selected.

Two weeks ago, we covered the Cleveland backfield and what could happen if Duke Johnson ’s trade request was accommodated, and yesterday Duke was flipped to Houston for a conditional fourth-round pick. We noted that second-year player Dontrell Hilliard might be the guy that would benefit from a Johnson trade, and Browns’ Senior Media Broadcaster Nathan Zegura noted in his analysis of the trade that Hilliard has impressed in camp. Expect Nick Chubb to trend up from his current ADP spot in the early third round and consider Hilliard as a late-round flier in PPR leagues.