Fantasy Baseball Daily Round Up: April 9

Brett Talley goes around the league, giving a daily state of the union for the world of fantasy baseball. He outlines current story lines and gives insight on what to watch for going forward. 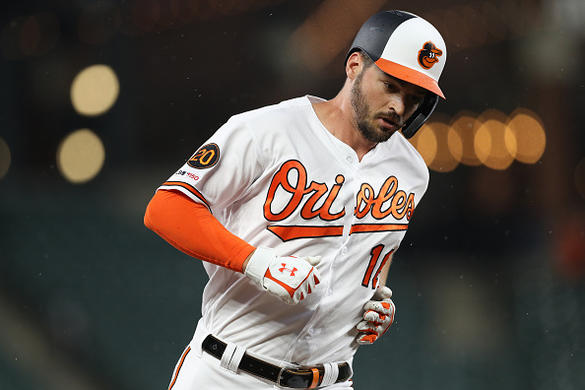 If you pay any attention at all, you know that Chris Davis has surpassed Eugenio Velez for the most consecutive hitless at-bats. Sadly, it’s not technically rock bottom since he is one behind Tony Bernazard for the most consecutive hitless plate appearances per STATS. The comparison of their careers is particularly sad as Bernazard was exactly a league average hitter over his 1,071 career PA while Velez was 30-percent worse than league average in only 718 PA. Davis has almost three times as many PA in his career as Bernazard and Velez combined, and he had peak seasons with wRC+ marks of 168 and 149.

Sometimes it’s more fun to highlight a lesser known name like we did with Merrill Kelly yesterday, but there’s no avoiding Blake Snell here. Snell struck out 11 and walked none while allowing only one run in six innings against the White Sox. Snell started off rough allowing five runs to Houston in his first start, but he has 24 strikeouts and one walk over his last 13 innings. Yesterday, you could say he had the curveball working.

While we’re tempted to give the nod to Cedric Mullins , who hit his first two career triples in the same game, we really have to go with fellow Oriole Trey Mancini . Mancini went 3-for-3 with a home run and walks in his other two plate appearances. While Mullins’ two hits doubled his season total, Mancini’s three brought him up to 15 on the season and he now has a 249 wRC+.

Mancini’s biggest problem in his young career has been his inability to elevate. He has a current GB/FB ratio of 1.82 for his career, and he hit more than double the number of grounders than he did fly balls last year. It is admittedly a very small sample size and way too early to draw any real conclusions, but Mancini has hit more fly balls than grounders through 44 PA this season. If any amount of that change holds up, Mancini’s fantasy value is going to be much higher than ever before.

While St. Louis’ 4-3 win over the Dodgers was a solid game, San Diego’s 6-5 win over San Francisco is the pick here. In yesterday’s Round-Up we noted that the game had the lowest over/under of the day at seven runs, but the teams delivered some unexpected offense. Here’s a look at the game chart from Fangraphs. 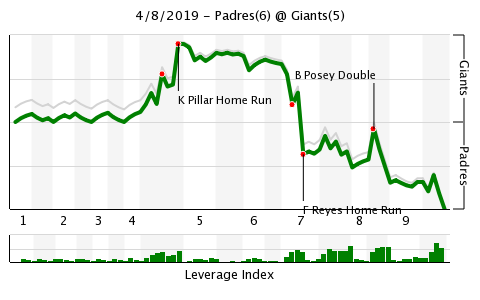 The Giants offense exploded for five runs in the bottom of the fourth, breaking the 0-0 tie, but San Diego chipped away at that lead over the next three innings. The Pads were down two through six innings, and the Giants decided to let Madison Bumgarner go back out for the seventh despite the fact that he had allowed home runs in each of the two prior innings. Bumgarner promptly hit Fernando Tatis Jr. and then gave up a double to Francisco Mejía before being pulled. Both of those runners ended up scoring, Tatis on a fielder’s choice and Mejia on a Franmil Reyes two-run home run that ended up being the game winner. A Buster Posey double to lead off the eighth brought SD’s win expectancy back down to 54-percent, but the ball never left the infield off the bat of a Giant for the rest of the game.

There’s a Coors game on the schedule, so you know that game has the highest over/under of the slate. The Rox are favored with the newly extended German Márquez on the mound against Max Fried . Mancini and the Orioles will have the chance to score some more today as their game against the A’s has the second highest total with the A’s opening a -150 favorite.

The lowest over/under of the day is the Twins-Mets game primarily due to Jacob deGrom being involved. New York is a -220 home favorite, so Minnesota’s implied total is incredibly low. That game is available on ESPN+. There’s a doubleheader on plain old ESPN with Toronto and Boston at 1:00 PM CT (Matt Shoemaker vs. Chris Sale ) followed by New York (AL) at Houston at 7:00 (Jonathan Loaisiga vs Gerrit Cole ).