Brett Talley pores over all of the statistics, splits, and matchups to uncover the very best DFS MLB Stacks for today's contests. 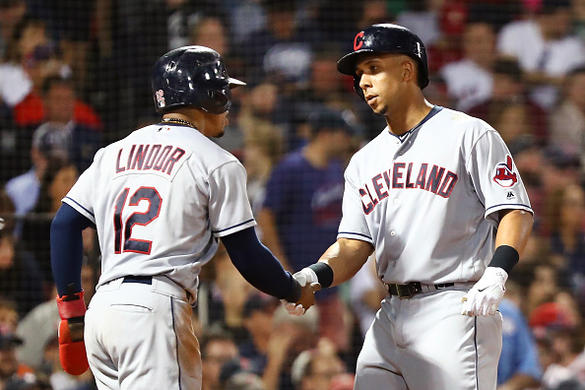 The Indians lead the slate in projected run total per Vegas as of this writing even though there is a game in Colorado tonight. The Indians have a great matchup against right-hander Marco Estrada who has an 8.75 ERA and 6.74 xFIP in his last five starts. Estrada’s K-BB% marks are in single digits against both left- and right-handed hitters this season, which makes him easy to stack against. José Ramírez is by far Cleveland’s best hitter, so he’s a very chalky pick today. Cleveland has four other hitters who have been more than 15 percent better than average against right-handed pitching: Michael Brantley (DTD), Francisco Lindor , Leonys Martín and Edwin Encarnación .

As mentioned, there is a game in Colorado tonight, and the Dodgers are the visiting team in that game. They’ll face right-hander Jon Gray who has lost his punchout ability of late with only a 15.3 percent strikeout rate in his last five starts. Gray has a mediocre 4.55 ERA and 4.38 xFIP in that stretch. Gray has not exhibited traditional splits this season, so hitters from both sides of the plate are in play for LA. The Dodgers have a whopping 10 hitters on the roster who have been at least 10 percent better than league average vs. RHP, so virtually the entire lineup will likely be in play tonight. Below are those 10 hitters with their numbers vs. RHP courtesy of Fangraphs.

If you were told that a pitcher had walked twice as many guys as he had struck out in his last three starts and had a 9.90 ERA with a 7.61 xFIP in those three starts, you might expect his opponent for the day to have a high projected total in Vegas. However, that’s the case for the Royals today against left-hander Stephen Gonsalves , and the Royals are just outside the top 10 in projected run total. Yes, the Kansas City lineup is bad, but this matchup trumps that. Whit Merrifield is by far KC’s best hitter against righties with a 156 wRC+ vs. RHP this season. Right-hander Hunter Dozier is also a good option as he’s hitting .340 with three home runs over the last 15 days. Merrifield will lead off, and Dozier should hit third in the order, so put those two guys in your roster and build out the stack a bit by adding a guy or two who join them in the top half of the lineup.

Straily isn’t deathly against righties or anything, but he has the third worst K-BB% against lefties among tonight’s starters. Pittsburgh features four lefties who have been safely above league average against right-handed pitching this season: Grégory Polanco , Adam Frazier , Corey Dickerson and Colin Moran . In Pittsburgh’s last two games against a right-handed starts, Frazier, Polanco and Dickerson have hit 2-3-5 in the order with Moran hitting seventh.