Andy Spiteri breaks down the mock drafts that took place this week! 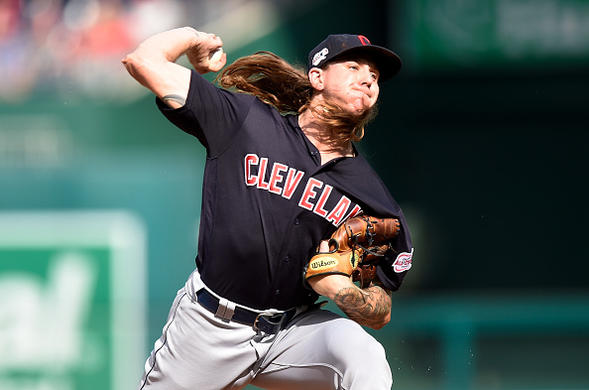 The second week of mocks was another one filled with great chats and everyone learning a bit of strategy, ADP, and player evaluations.  We had our first “west coast” mock that started at 10:30pm ET on Thursday and that was one of the best chat rooms we had this year so far.  Couldn’t get a late one in this week but will get at least one a week in for the rest of the mock season.  Last week we covered the early part of the draft with the Acuna/Yelich/Trout debate and the “pocket aces” strategy being promoted by @batflipcrazy on Twitter.  There was a switch this week with Acuna being taken first in three of the four mocks.  The trend has filtered to the Army. Current ADP has it Acuna/Yelich/Trout in the NFBC over the last few weeks.  A lot of heads are shaking at this one.

One interesting player to look at is Mike Clevinger .  Before his knee injury he was being taken in the second round.  In the three 12 team mocks this week he went in the third, fourth and fifth rounds. I took him in the fourth round because I believe he had a debridement of his meniscus.  This surgery is relatively minor and he should bounce back quickly.  With the timetable given, he should only miss two to four starts and this shouldn’t affect his overall value much.  The discount by two to three rounds is just about right and if he beats his timetable, you’ll be rewarded.

Another player that intrigues me is Luis Robert .  I understand all the hype but I am not one to take on an unknown when there are players available a round or two later that are proven and projected to put up similar or better numbers.  In Tuesdays mock he was pick 10.2, Wednesday 9.6 and Thursday 8.5.  His ADP from 2/1-2/23 is 80.6 in the NFBC.  His steamer projections courtesy of Fangraphs are 25 HR, 75 R, 81 RBI, 23 SB and .273.   The following players are all projected to do better than him in EVERY category except steals with the exception of Michael Conforto ’s batting average….Conforto, Marcell Ozuna , Nick Castellanos and Eddie Rosario .  Their ADPs range from 92.6 for Rosario to 115 for Conforto.  Yes, I understand the hype, but if I’m going to invest in that range it’s going to be one of these four who have a track record.  I may miss out, but then again, I may not because the only thing I’m missing out on are the steals.  Many got burned by Vlad Jr. last year and were rewarded for waiting until later in the draft to take a chance on Pete Alonso instead.

Our own Howard Bender is promoting a steals and saves strategy which he employed in a draft he did recently and covered in our draft guide.  Each year you have to decide what to do about saves. In a standalone league do you wait and get some saves late and use FAAB throughout the year or do you go for a dominant closer or two and put yourself in position to finish high in the category?  In a league with an overall component you have to get some saves to finish in at least the middle of the pack in order to have a chance at finishing near the top.  Of course with the volatility of the position, FAAB also comes into play and one can fish for saves throughout the season. I tend to go for a couple of middling closers as to not spend too much draft capital on them, and then supplement if needed during the season with FAAB or trades.

Where are the top closers going in our mocks as compared to the NFBC recent trends?  Josh Hader was the first closer off the board in all three of the 12 teamers.  He was taken in the fifth round twice, and sixth round in the other for an ADP of 70 vs. an ADP of 63 in the NFBC.  The Army is waiting about a half round later to start on the top five closers.  Kenley Jansen is the last of the top five to be taken and his Army ADP is 112 vs 127 in the NFBC.  It’s a small sample, but the Army is starting to take the top closers a little later, but it takes the fifth one about a round sooner.

These little snippets are what allows you to use the MDA to your advantage.  Competing in a live mock while trying different strategies, asking questions, and learning how to adjust on the fly when you get sniped are what hones your skills and makes you a skilled drafter.  Join us every Monday to Thursday on RTSports.  Always available to answer your questions on Twitter @gasdoc_spit

B. Buxton - CF
MIN
Byron Buxton (family) has arrived in Minneapolis and is being processed through MLB's intake testing protocol.
Buxton was excused from the first weekend of summer camp following the arrival of his second child on Friday. His coronavirus test results should be ready around the middle of the week, and if he's in the clear, he'll be given the go-ahead to join the workouts happening at Target Field. The 26-year-old played well last season when healthy and could be a highly valuable multi-category producer in MLB's planned 60-game sprint.
Added Yesterday 10:01 pm (EST)
Added Yesterday 10:01 pm (EST)

J. Guerra - RP
ARI
Junior Guerra has tested positive for COVID-19, Diamondbacks manager Torey Lovullo announced Sunday.
Silvino Bracho also tested positive. Guerra was signed to a one-year, $2.55 million free agent contract in December and could be a valuable bullpen piece for Arizona in this condensed campaign given his ability to work multiple innings in relief. He had a 3.55 ERA, 1.12 WHIP, and 77/36 K/BB ratio in 83 2/3 innings (72 appearances) last season with the Brewers. The 35-year-old right-hander will be put in quarantine and must pass two consecutive COVID-19 tests before he is allowed to return to the D-backs.
Added Yesterday 9:49 pm (EST)
Added Yesterday 9:49 pm (EST)

A. Heaney - SP
LAA
Angels manager Joe Maddon confirmed Sunday that Andrew Heaney is locked in as the team's Opening Day starter.
It will be the first career Opening Day start for Heaney, who struck out 118 batters over 95 1/3 innings last season and spent the shutdown period working further and further away from the elbow and shoulder issues that have recently plagued him. He's a worthy mid-to-late round pick in fantasy drafts this summer.
Added Yesterday 9:23 pm (EST)
Added Yesterday 9:23 pm (EST)

K. Yates - RP
SD
Kirby Yates is expected to do his intake testing on Monday and Tuesday.
And if he's clear of COVID-19, he could participate in his first summer camp workout on Wednesday. Yates was late arriving to camp due to a positive diagnosis within his family. The 33-year-old right-hander should be among the first relievers off the board in summertime fantasy drafts after posting a 1.19 ERA and 101/13 K/BB ratio over 60 2/3 innings least season while leading all MLB closers in saves with 41.
Added Yesterday 9:19 pm (EST)
Added Yesterday 9:19 pm (EST)

S. Bracho - RP
ARI
Diamondbacks manager Torey Lovullo announced Sunday that Silvino Bracho and Junior Guerra have tested positive for COVID-19.
It's unclear whether the cases were diagnosed through MLB's intake testing protocol or before. Either way, the two pitchers will be absent from summer camp workouts until they pass consecutive COVID-19 tests. Bracho suffered a recent setback in his recovery from Tommy John surgery, so it's unclear how much he is able to do at the moment anyway. Guerra signed a one-year, $2.55 million deal with Arizona in December.
Added Yesterday 9:11 pm (EST)
Added Yesterday 9:11 pm (EST)

F. Perez - SP
DET
Tigers RHP prospect Franklin Perez (shoulder) threw a bullpen session this weekend at Tigers summer camp.
Perez resumed working from a mound in February after taking several months off to a heal a shoulder issue, and it looks like he should be able to pitch in intraquad games at some point this summer. The 22-year-old was included in the Tigers' initial player pool, but it's unclear whether he'll see any actual MLB action.
Added Yesterday 8:53 pm (EST)
Added Yesterday 8:53 pm (EST)

F. Mejía - C
SD
AJ Cassavell of MLB.com writes that Francisco Mejia has "looked sharp" in the Padres' first two intrasquad games.
Mejia went 0-for-15 in the Cactus League this spring, but it's always been silly to draw any conclusions from spring training numbers. The 24-year-old former top prospect would seem to be a good option for the Padres at DH and should get a boost in fantasy value with the addition of that role to the National League scene. He's a sneaky post-hype breakout candidate heading into MLB's planned 60-game 2020 campaign.
Added Yesterday 8:28 pm (EST)
Added Yesterday 8:28 pm (EST)

K. Lewis - LF
SEA
Mariners manager Scott Servais praised Kyle Lewis' physical condition during a Zoom call with reporters on Sunday.
Lewis finally put his knee issues in the rearview last season and in September delivered an .885 OPS with five home runs over his first 18 major league games. He used the shutdown to work with private hitting, speed, and strength coaches. “Coming back from a very serious knee injury, it takes time,” Servais said. “You might be physically strong and everything checks out, but it’s always in the back of your head. That’s what it looks like to me, that it’s kind of freed him up now. ... The ceiling, the upside for Kyle, the sky is the limit."
Added Yesterday 8:10 pm (EST)
Added Yesterday 8:10 pm (EST)