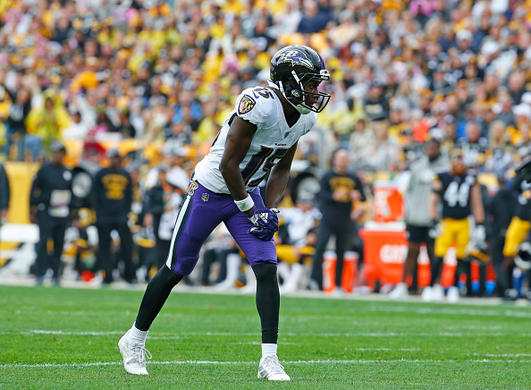 Marquise Brown made a statement in his first NFL game last season. He opened his career with four catches for 147 yards with two touchdowns. The Ravens wide receiver had eight catches for 86 yards on 13 targets the next week, but only had four games of double-digit points in PPR formats in the rest of his 12 games.

Brown was looked at as a boom or bust player and he was. Many are going to have the same opinion of Brown this season since the Ravens are a run-first offense. I believe we have yet to see the best of Brown and he can be a league winner in 2020.

Last season was only a glimpse of the talent Brown has. He played in 14 games and had 71 targets, catching 46 passes for 584 yards and seven touchdowns. The first wide receiver selected in the 2019 draft played with two screws in his left foot as he was coming off Lisfranc surgery. There were weeks he didn't practice much. The Ravens had several big leads and didn't need to push Brown. He played at least 62 percent of the snaps in only six games. Brown was below 59 percent in the other eight games. For the season, he played 51 percent of the snaps.

Brown had the screws from his foot removed in the off-season and said he feels like he has a new foot. Brown has the speed to get past most defensive backs and the defense has to focus a lot on the running game and the threat of Lamar Jackson running. Brown has been able to work out more this year and played last season at 157 pounds. He plans to play at 170-175 pounds in 2020.

Brown's rookie season was impressive considering he missed a lot of time and never got a great rapport with Jackson. Brown missed OTAs, minicamp and a portion of training camp. He was on the injury report and limited in practice in many weeks. Brown said his foot never felt right. Brown also injured his ankle in Week 5 and missed the next two games.

Brown only had 13 targets in the final five games, but Brown had seven receptions for 126 yards against the Titans in the playoff game. The Ravens asked Jackson before the draft if he wanted Brown in 2019 or Jerry Jeudy in 2020 and Jackson said Brown.

The concern many will have for Brown is the targets. The Ravens had 596 rushing attempts last season and averaged 5.53 yards per carry. It will be very difficult to repeat that. The Ravens went 14-2 and won many games comfortably and each team in the division is improved. Jackson only attempted 401 passes last season and that likely increases.

Of course, the Ravens offense is likely going to regress. Jackson had a nine-percent touchdown rate, while Brown scored on 9.9 percent of his targets. The increase in targets should help offset some of that regression. Keep in mind Brown wasn't healthy. Brown was involved in the offense early in the season with 39 targets in the first five games before he suffered the ankle injury. Averaging eight targets per game over 16 would be 128 and while that seems high in this offense, an average of seven over 16 games is 112 and that's possible.

Tight end Mark Andrews likely remains the top target in the offense, but Brown should reach at least 100 targets this season. Brown is an explosive player that has the ability to take to the end zone on any play. There isn't much competition for targets among the other wide receivers.

Brown has an ADP of 79 in Bestball10s since May 1. He can be drafted as a WR3 or WR4 and he has immense upside with breakout potential. That's what the goal is in that range of wide receivers. In that area, you're looking for a difference maker and Brown flashed big potential as a rookie and wasn't even close to 100 percent