Adam Ronis examines some wide receivers worth targeting outside the top 150 ADP for your Best Ball drafts. 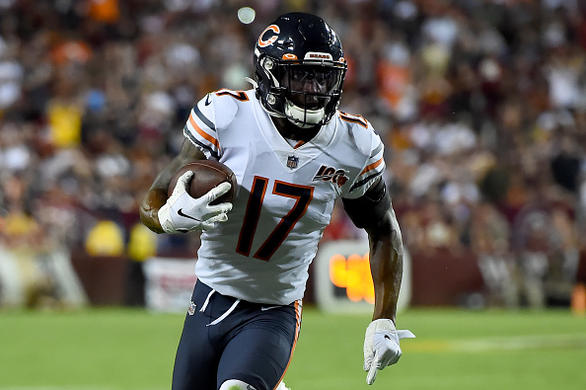 Now that the draft is done and most free agents have signed, there is more data and Average Draft Position (ADP) for best ball drafts. With the focus on running backs in the early rounds of drafts, especially in best ball formats, many are taking more wide receivers in the later rounds. Here are some of the top targets outside the Top 150, according to Bestball10s.com ADP since May 1.

Miller was a pick added off the waiver wire late last season that helped many teams in a playoff push. He had a shoulder injury in his rookie season and played most of it with one good shoulder. He had surgery after the season and it led to him playing limited snaps early last year. Miller took advantage when Taylor Gabriel missed time with a concussion. Over the final seven games, Miller averaged 7.9 targets per game. From Weeks 10-14, Miller had 33 receptions for 431 yards with two touchdowns. Allen Robinson will command most of the targets, but Miller doesn't have much competition after that. Miller is one of my favorite targets in this range.

Williams was impressive in his rookie season before an ACL tear ended his year in November. In eight games, Williams led the team in targets, receptions and yards. He had 32 receptions for 428 yards with three touchdowns and at least nine points in PPR formats in every game. The Dolphins didn't draft one wide receiver and while DeVante Parker will likely lead the team in targets, Williams should be second and is expected to be ready for the start of the season.

Not everyone produces immediately. It took DeVante Parker five seasons before having the big year. Perriman was a first-round pick in 2015 by the Ravens and missed the season with a knee injury. Perriman is a big receiver that can run well. Perriman had at least a touchdown or 100 yards receiving in each of the final four games last season for the Buccaneers and averaged 13 PPR points in the last five games. Over the last two seasons in limited opportunity, Perriman has 95 targets and averaged 18.9 yards per catch and 10.5 yards per target. Jamison Crowder will get his targets from the slot and the Jets drafted Denzel Mims and rookie wide receivers can struggle in the first season, especially with limited off-season work with the quarterback. Perriman should play the Robby Anderson role and he's very cheap with a high ceiling.

Jackson is the poster boy for best ball. Throughout his career, he's been difficult to gauge when the big game will happen in redraft leagues. The week it appears he has a favorable matchup, Jackson has three catches for 42 yards and then you bench him. Then he goes off with seven catches for 152 yards and two touchdowns. In best ball, you don't have to worry about that. Jackson had core muscle surgery in November and says he's healthy. Jackson opened last season with eight catches for 154 yards and two touchdowns and got injured in Week 2. There's risk since Jackson turns 34 on December 1 and he's reliant on his speed. In this draft range, three to five big games can help out a fantasy team. Jackson has 32 career touchdowns of at least 50 yards. In 2018, Jackson had six games of double-digit points in PPR formats in 12 games and averaged 18.9 yards per catch.

Harry, a first-round pick last season, is another rookie receiver that struggled in his first season. He had injuries, playing seven games. He had an ankle injury that bothered him to start the season and left Week 14 early with a hip injury. The Patriots offense is difficult to learn and most rookie receivers don't contribute much for them. Harry was productive in college and very athletic. There's a big opportunity for him to get targets in this offense.

The Colts needed a big body receiver and drafted Pittman with the second pick of round two. Pittman is 6-foot-4, 223 pounds and ran a 4.52 40-yard dash. Pittman is expected to start on the outside opposite T.Y. Hilton . The Colts have a very good offensive line and likely will rely on the run, but Pittman isn't expensive and capable of producing a few big games if he can develop a rapport with Phillip Rivers. Pittman has good hands and body control and Rivers likes throwing the ball downfield to his big receivers. Colts coach Frank Reich has gone out of his way to shower Pittman with praise.

Campbell was selected with the 59th overall pick in 2019 and didn't have a great rookie season. He was limited to only seven games due to several injuries with his season coming to an end with a broken foot. He also had an abdominal injury and broken hand. This is an opportunity to buy low. Campbell is expected to play the slot and he's very athletic and excellent after the catch. Philip Rivers tends to target players in the middle of the field and constantly peppered his slot target, Keenan Allen , with the Chargers. Campbell has been a frequent target for me in the final few rounds of drafts.

C. Newton - QB
NE
NFL Network's Ian Rapoport reports Cam Newton's contract includes $550,000 guaranteed.
The details include a $1.05 million base salary with $700,000 in per-game roster bonuses that could cap at $7.5 million. It's truly a bare-minimum 'prove it' deal for Newton as the Patriots were the only team in on the veteran while he was unable to receive either a workout or physical. Coach Bill Belichick reportedly hasn't guaranteed the 31-year-old a starting gig but we would expect the veteran to get the nod over Jarrett Stidham in the team's season opener. It's a low-risk gamble with Championship implications that benefits both sides this year.
Added Yesterday 10:02 am (EST)
Added Yesterday 10:02 am (EST)