Adam Ronis breaks down the rookie wide receivers to target for your redraft leagues. 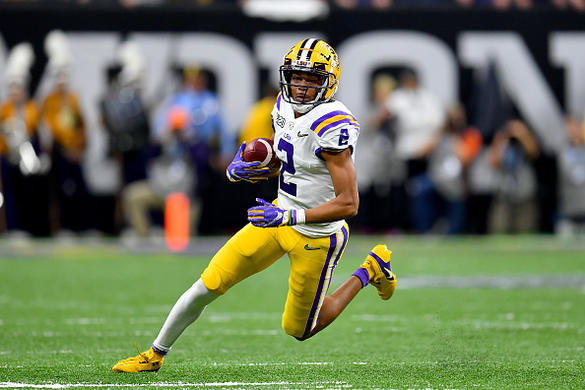 The 2020 wide receiver class was deemed very deep and one of the better classes in recent years. Unfortunately, that won't translate into instant fantasy success this season. The top receivers didn't land in the ideal spots for big target shares. There's also the absence of mini camps and OTAs due to COVID-19 that will make it difficult for wide receivers to develop a rapport with their quarterbacks. It's easier for rookie running backs to adjust to the NFL. Here's a look at some of the top receivers for redraft leagues among the rookies, but it's unlikely any finish in the Top 30 barring an injury in front of them.

Jefferson goes to a team that really needed a receiver. Stefon Diggs was traded to the Bills and he accounted for 30 percent of the Vikings' passing yards last season and had 94 targets in 15 games. After Adam Thielen , there aren't many good receivers on the roster. The Vikings did use a lot of two tight end sets last season and Jefferson had much of his production come from the slot last season. The key for Jefferson will be winning against press coverage if he has to play the outside, but there's plenty of targets for Jefferson, even in a run-first offense. Jefferson had 111 catches for 1,540 yards and 18 touchdowns last season for LSU. 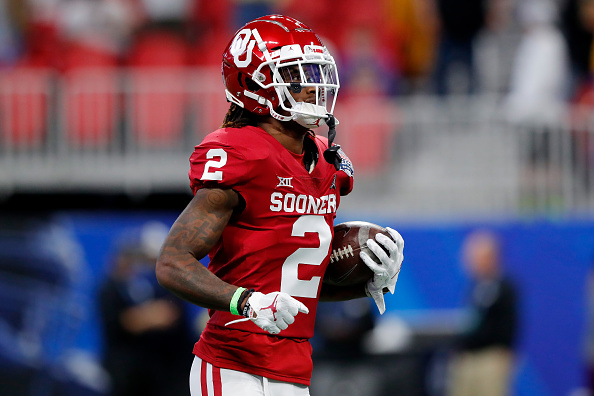 This isn't the ideal landing spot. Lamb wasn't expected to last to pick 17 and he wasn't on the Cowboys radar. They took the best player available and while Amari Cooper and Michael Gallup make things difficult for a path to targets for Lamb, it might not be that bad. Much depends on if the Cowboys pass as often as last season. Randall Cobb was the third wide receiver in the offense and had a 14.4 percent target share, getting 83 targets. He had 55 catches for 828 yards with three touchdowns in 15 games. The Cowboys have 190 vacated targets, which is the second most in the NFL and they didn't add any receivers besides Lamb in the draft. Lamb is one of the most talented to receivers to come out in recent years and it's possible he becomes more of a focal point than many think.

Jeudy is right there with Lamb as one of the top receivers in this draft class. Jeudy should be assimilated into the offense quickly and get a target share in the 15-18 percent range as the complement to Courtland Sutton . Jeudy is an elite route runner and consistently finds himself open. In addition to Sutton, Jeudy will vie with tight end Noah Fant and rookie slot receiver KJ Hamler. The Broncos also have a solid running game with running backs Melvin Gordon and Phillip Lindsay , whom both are adept at catching passes. Much of the Broncos success is also dependent on the development of second-year quarterback Drew Lock .

Ruggs was selected as the first wide receiver in the draft at 12th overall. While he's known for his speed with a 4.28 40-yard dash, he's not only a deep threat. He's a solid route runner and good after the catch. The Raiders have Tyrell Williams and Hunter Renfrow at wide receiver and Darren Waller at tight end and he led the team last season with 117 targets. The Raiders also drafted receiver Bryan Edwards and Lynn Bowden, who could be used at running back and receiver. Ruggs should see targets, but Derek Carr needs to take more chances downfield to take advantage of Ruggs.

The Eagles were in need of a wide receiver and more speed. Greg Ward and Robert Davis were their starting receivers in a playoff game. Injuries derailed the position for the Eagles last season with injuries to Alshon Jeffery and DeSean Jackson hurting the offense. Reagor is an explosive athlete that ran a 4.47 40-yard dash. Reagor didn't put up great numbers last season due to poor quarterback play. The Eagles run a lot of two-tight end sets with Zach Ertz and Dallas Goedert , so opportunities could be limited for Reagor if Jeffery and Jackson can stay on the field. That seems unlikely with Jackson playing three games last season and Jeffery missing nine games the last two seasons and coming off a Lisfranc injury, so Reagor could emerge quickly.

The Colts took Pittman with the second pick of the second round. He will play outside opposite T.Y. Hilton with Parris Campbell likely in the slot. The Colts really needed another receiver, especially one with size and Pittman is 6-foot-4 and 223 pounds. Colts coach Frank Reich has been effusive in his praise of Pittman, so he might play a bigger role than we think. The Colts have a good offensive line and also moved up in the second round to draft running back Jonathan Taylor to pair with Marlon Mack . With Philip Rivers losing arm strength, they will likely ask him to manage the offense and lean on the run game.

NFL Bills get a playoff W, 100s of tables are smashed

D. Bryant - WR
BAL1
Dez Bryant failed to catch his lone target in the Ravens' Division Round loss to the Bills.
Bryant was able to make it back into the NFL following an Achilles tear, but he doesn't have the explosiveness to be a contributor anymore. It's certainly possible he retires in the coming weeks. Bryant, 32, had six catches across six games for the Ravens in 2020.
Added 12:42 am (EST)
Added 12:42 am (EST)

W. Snead - WR
BAL
Willie Snead caught 5-of-5 targets for 25 yards in the Ravens' Division Round loss to the Bills.
A slot receiver only, Snead compiled 33 receptions for 432 yards and three touchdowns on 48 targets in 2020. He missed three games after popping up on the reserve/COVID-19 list. On tape, Snead operates like a true veteran but lacks the play-making ability to make him a sought-after free agent. He'll likely compete for a starting spot in three-receiver sets this summer, possibly outside of Baltimore. Snead hasn't hit 700 yards in a season since 2016. He'll be 29 years old next year.
Added 12:36 am (EST)
Added 12:36 am (EST)

M. Boykin - WR
BAL
Miles Boykin caught 3-of-4 targets for 20 yards in the Ravens' Division Round loss to the Bills.
A third-round dart throw in the 2019 NFL Draft, Boykin has posted 198- and 266-yard campaigns in his first two seasons. He hasn't developed enough to believe he'll turn into a fantasy asset in this run-heavy Baltimore offense, especially with the Ravens likely to bring in receiver competition this offseason, mainly to take away his starting spot. Boykin's career 8.4 yards per target average is the lone positive on his profile at the moment. He'll be undrafted in standard-sized fantasy leagues this offseason. Boykin is 25 years old.
Added 12:30 am (EST)
Added 12:30 am (EST)

M. Brown - WR
BAL1
Marquise Brown caught 4-of-7 targets for 87 yards in the Ravens' Division Round loss to the Bills.
Brown was unusable for the first half of the 2020 season in fantasy circles, but he caught fire down the stretch to somewhat save his end-of-year stat line (58-769-8 on 100 targets). The second-year pro was utilized downfield even more this season, which partially explains his streaky production. It's worth questioning if Brown profiles as an NFL team's No. 1 receiver. At the very least, the Ravens need to bring in a capable No. 2 receiver this offseason to ease Brown's individual matchups. Nonetheless, his elite speed will keep his fantasy hopes alive as a flex option. He's averaged 45.1 yards per game through two seasons.
Added 12:20 am (EST)
Added 12:20 am (EST)

G. Edwards - RB
BAL1
Gus Edwards rushed 10 times for 42 yards in the Ravens' Division Round loss to the Bills.
Edwards was the Ravens' No. 2 back for the entire 2020 season. He earned the "power back" role over Mark Ingram in the second half of the season and could be brought back for a similar roster spot in 2021 as a restricted free agent. Despite the power back label, Edwards has impressive elusiveness for a 238-pounder. He averaged 5.0 yards on his 144 carries. Edwards will max out as a fantasy RB4 if the Baltimore backfield is Edwards and J.K. Dobbins in 2021 because he's not a receiving threat (9 receptions). Dobbins, who averaged 6.0 yards per carry as a rookie, is obviously the future of Baltimore's running back group.
Added 12:12 am (EST)
Added 12:12 am (EST)

T. Huntley - QB
BAL
Tyler Huntley completed 6-of-13 passes for 60 yards in the Ravens' Division Round loss to the Bills.
Huntley entered the game in the fourth quarter after Lamar Jackson was ruled out with a concussion. They were his first NFL reps, and he obviously looked like a rookie. Huntley missed a wide-open deep target that would've made things interesting late. The undrafted free agent could be the Ravens' answer at backup quarterback moving forward given Robert Griffin's injury history. The Utah grad was somewhat of an analytics sleeper in NFL Draft circles.
Added 12:08 am (EST)
Added 12:08 am (EST)

J. Dobbins - RB
BAL1
J.K. Dobbins rushed 10 times for 42 yards in the Ravens' Division Round loss to the Bills.
Dobbins was never able to break out of the Ravens' running back by committee despite averaging 6.0 yards per carry. He reached 100 rushing yards just twice and only averaged 12.1 carries in the nine games after the bye. The Ravens are likely to part ways with Mark Ingram this offseason, so Dobbins' 2021 box scores should be improved even if Gus Edwards hangs around as a restricted free agent. Lamar Jackson's lack of history targeting running backs and Dobbins' questionable hands (18 receptions) leave his fantasy ceiling tied to rushing production (805-9 on 134 carries). That's fine in standard scoring. Less than ideal in PPR. Dobbins will project for 1,000 or more yards in 2021 as the Ravens' 1A in a potential two-back committee.
Added Yesterday 11:52 pm (EST)
Added Yesterday 11:52 pm (EST)

T. Yeldon - RB
BUF
T.J. Yeldon rushed two times for four yards in the Bills' Divisional Round win over the Ravens.
Yeldon is the No. 2 running back with Zack Moss, but the coaching staff clearly doesn't want him on the field. Devin Singletary dominated snaps, leaving Yeldon with just two meaningless carries in garbage time. He's not a DFS option unless you're trying to galaxy brain a contrarian lineup in single-game tournaments.
Added Yesterday 11:42 pm (EST)
Added Yesterday 11:42 pm (EST)