Adam Ronis brings you his favorite value plays from DraftKings and FanDuel for tonight's DFS slate. 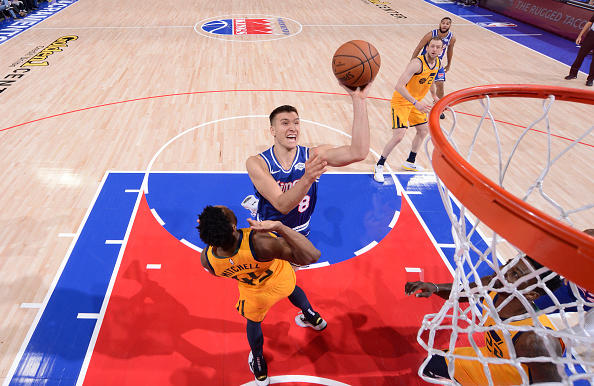 What’s up FANation? For Tuesday's slate, we have eight games. As always, this article isn’t for plays ONLY under 5K, but players that are undervalued at their specific price on DraftKings and FanDuel. This is a slate where there is a lot of value due to injuries and more can open up closer to lineup lock.

Assuming Rodney Hood is out, Bazemore becomes appealing. He played a season-high 34 minutes the last game in an overtime win over the Hawks. He had 13 points, eight rebounds, three three-pointers, two steals and two blocked shots when Hood was sidelined. The Blazers-Kings is the highest projected game of the night at 222.5.

Bogdanovic will benefit with DeAaron Fox out with an ankle injury. Even if he sticks with the second unit and doesn't start, he will get the chance to run the offense when he's on the court. If he comes off the bench, he still will play at least 30 minutes. He...

NBA Spencer Dinwiddie will sit out the Orlando restart

T. Davis - SG
TOR
Terence Davis said he's working on "mastering the pick and roll."
“I think I’ll be a secondary ball-handler going into the bubble," Davis said. "And [I'm working on] shooting off the dribble ... I can shoot the ball off of catch-and-shoot with Kyle [Lowry], Fred [VanVleet] creating for me ... the next step is creating my own shot." It's not guaranteed that Davis will earn more than a handful of minutes in the Raptors' rotation, though, so he'll be a dubious DFS play while Lowry, VanVleet and Norman Powell are healthy.
Added 12:22 pm (EST)
Added 12:22 pm (EST)

R. Gobert - C
UTA
Rudy Gobert said in a recent interview that he "can be very annoying" when demanding the ball on offense.
"I understand that I'm annoying," Gobert said. "I think maybe because [Donovan Mitchell] was really good really early, I've been very demanding and maybe in not always a positive way ... Donovan has gotten better every year since he's gotten here. I think he's going to keep getting a lot better. It's pretty much, I'm the a--hole." Gobert has been publicly contrite about his behavior prior to testing positive for coronavirus, and he's mended fences with Mitchell. Beyond the absence of Bojan Bogdanovic (wrist surgery), the Jazz should be in good shape when play resumes in Orlando.
Added 10:05 am (EST)
Added 10:05 am (EST)

P. Siakam - PF
TOR
Pascal Siakam said recently that he went "around three months without actually playing or shooting the basketball."
Siakam said that's easily the longest stretch that he's gone without playing basketball. Raptors coach Nike Nurse said that Siakam looks "great" in workouts, and the time off isn't likely to have a lasting impact when play resumes on July 30. “[W]ith everybody there’ll be a little bit of rhythm adjustment from the game, conditioning, rhythm and remembering sets and all that kind of stuff," Nurse said. "Look, if you walked in the gym this morning and watched [Siakam and Matt Thomas] work out, you wouldn’t have known they missed two months without touching a ball, I don’t think.”
Added 9:57 am (EST)
Added 9:57 am (EST)

N. Jokic - C
DEN
Nuggets GM Calvin Booth is confident that Nikola Jokic will soon join the team in Orlando, saying, "I think he’s feeling good about his situation and is ready to go."
The other side of the equation is that Jokic, who tested positive for COVID-19 while in Serbia, is still arranging flights to join his teammates in the bubble. “We’re trying to work out the logistics right now,” Booth said on Wednesday. "He’s not en route as far as I know. I think [he's] waiting, just to get a proper flight and get here." The Nuggets don't even seem fully informed about the whereabouts of their franchise center, but all signs point to him joining the team in Orlando -- eventually.
Added 9:56 am (EST)
Added 9:56 am (EST)

M. Beasley - SF
DET
Michael Beasley is moving toward a deal with the Brooklyn Nets, according to Shams Charania of The Athletic.
Just hours after the Nets reportedly added Jamal Crawford, they look to have their second substitute player lined up to help fill the minutes left by the seven inactive players. Beasley would be in a fantastic spot with the Nets, and he’d certainly cut into Rodions Kurucs’ minutes. Although, he will have to serve a five-game suspension, so Kurucs should still be busy to kick off the restart.
Added Yesterday 10:49 pm (EST)
Added Yesterday 10:49 pm (EST)

K. Leonard - SF
LAC
Kawhi Leonard did not travel with the team on Wednesday to Walt Disney World for the resumption of the NBA season and he will join the team in a few days, according to Chris Haynes of Yahoo! Sports.
The report adds Leonard was given permission by the organization to tend to a family matter. The Clippers shut down their practice facility on July 2, and their first practice in Orlando is scheduled for July 10 from 6:00-9:00 EDT. Leonard could miss that practice along with the practice on July 11, but this shouldn't affect his status for games.
Added Yesterday 8:14 pm (EST)
Added Yesterday 8:14 pm (EST)

J. Crawford - SG
BKN
Jamal Crawford has agreed to a deal with the Brooklyn Nets, according to Shams Charania of The Athletic.
It's a big addition to a Nets team that was missing seven players, especially in the backcourt with Kyrie Irving and Spencer Dinwiddie out. Even with his 19 years' experience, Crawford showed late in the 2018-19 season he can still get buckets with 51 points in his last NBA game back on Apr. 9, 2019.  Besides Caris LeVert, the Nets really need some guys who can score and create their own shots, so Crawford should be able to find some shots in the second unit. His arrival should cut into playing time for Chris Chiozza, Tyler Johnson, Dzanan Musa and Timothe Luwawu-Cabarrot.
Added Yesterday 8:01 pm (EST)
Added Yesterday 8:01 pm (EST)